Free Diving with the Sharks – Why Not? 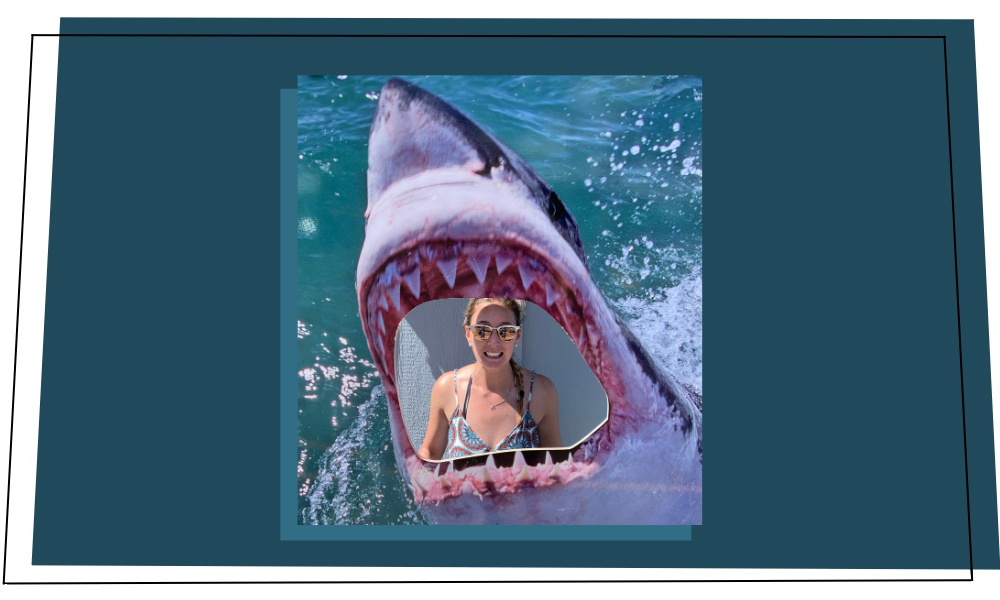 My better half, Mike, has always been intrigued by sharks. Visiting his home for the first time, his interest was evident. He had a shark-shaped bookend holding up his records and a small white shark sculpture on a credenza. I sarcastically asked him if he was into sharks. His eyes lit up.

When our first Christmas together was approaching and we were in the process of planning our upcoming trip to Hawaii, I thought it might be neat to look into some options of diving with the sharks. You know, the caged-shark diving.

I tend to over-research gifts… especially when it’s an experience. I want to ensure the experience I’m giving is going to be memorable. I often find myself going down the internet wormhole…and this time it lead me to free diving with the sharks.  No. Cage.

Free diving…No cage?? It sounded crazy…but it also sounded different… I like different (and admittedly, I was trying to out-do Mike because his gifts are so thoughtful and I really had to up my game. But it would require more research).

I had researched one of the companies offering this experience quite extensively (I mean, it’s crazy enough to willingly CHOOSE to swim, unprotected, with these beasts…in THEIR home…I wanted to be sure the people taking us out there knew what they were doing).

One Ocean Diving, is widely known for their efforts to smash the negative stigma of shark attacks. The owner, Ocean Ramsey, is a marine biologist herself and famous for her photoshoots swimming alongside great white sharks. Along with providing the experience of free-diving (sounds more elegant than cage-less) with the sharks, the marine biologists who execute the daily dives also provide a very informative and concise educational session about sharks: aggressive movements to watch out for, how to behave in the water with the sharks, what they like to eat, some of their migration patters, etc. It was one of the highlights of the trip!

I had originally picked a date smack in the middle of our two week adventure in Hawaii. Obviously I didn’t want to go at the start of the trip…you know…in case something went horribly wrong the entire trip would be ruined. But, I was also cognizant of the fact that these trips can be cancelled/rescheduled due to a variety of things such as bad weather, poor visibility and rough waters. I wanted enough time to reschedule if this happened…and it did!

The morning of our scheduled D-day (Dive Day), we received a notification that poor weather the previous day had caused run-off into the ocean. Rain water from a storm funnels downward through the lands, mixing with sand, dust, etc. and “runs off” into the ocean. Mixed with various sediment, the run-off water is cloudy – like a puddle on a dirt road. This causes reduced visibility in the water. The effects of run-off water can last long after the storm has passed. It’s thought that this cloudy water further confuses the sharks. It’s often said that people sitting on surfboard awaiting their next wave, appear similar to a seal from the waters below…especially when the water is cloudy. This is thought to be the explanation for some of the attacks.

So when we heard this, while it was disappointing, we understood. Who wants to be confused as a seal in shark territory? So we rescheduled for the day before our departure….and hoped for the best! Luckily we got a pretty decent day.

We hopped on the boat, along with four other participants two marine biologists and one operator. The provided us with flippers, a mask and a rash guard which were all of great quality.

We were given crash course on sharks on our ride out to the diving spot. This was hands down one of the best parts of the experience. To be fair, at this point I was dealing with some anxiety of actually getting in the ocean, without any protection, with a gaggle of sharks feasting below me (this spot is chosen for a reason…it’s a feeding ground where large amount of nutrients are being pushed up from the ocean floor below). To have someone leading the charge who not only understands shark behaviour, but also jumps in the water with these animals multiple times a day is key. He explained how to interact when swimming with the sharks, and further drove home the point: sharks just aren’t that interested in humans.

Some of their advice:

Our marine biologist was EXCELLENT with his explanations. I can only imagine how many times he’s done this, however it felt like we were his first group. You could tell how passionate he was about this, educating us in a very animated manner and taking the time to answer all of our questions. It was amazing.

Mike and I anxiously looked on as the biologist banged on the side of the boat. Within seconds 10-15 fins appeared near the motor of the back of the boat. It was a frenzy of sharks! Mike looked like a kid in a candy store. I immediately regretted my efforts to elevate my gifting game. Research had become reality. What the heck had I gotten us into?

Soon the anchor was dropped and the motor was cut. One of the marine biologist jumped in. He was scoping out the temperament of the beasts to ensure we were in the clear. He gave us the green light.

Mike asked if I wanted to go in first. Um no. This was his gift…he was welcome to be eaten first. And, he was up for the challenge! I began to feel his excitement as he lowered himself into the water, careful to minimize the amount of bubbles he creates. What was the worst that could happen?

Soon we were both in the water with about 20 – 30 sharks swimming below us. We were graced with the presence of Sand Bar sharks and Galapagos sharks…the tamer of the species. And you know what? The marine biologist was right! They couldn’t have been less interested in us. Seriously…it was border-line offensive. They just went about their merry days swimming below us, gobbling up whatever nutrient was on the menu for the day.

Their movements were incredible. Almost calming. For me, it was a breathtaking performance art piece by mother nature. Watching their bodies sway back and forth, propelling themselves in this beautiful blue ocean. The sun from above cast light shadows across their bodies below. Other smaller fish swam alongside them. Truly amazing.

I have to say, as nervous as I was, this was definitely in my top three as far as life experiences go. An avid water-lover my entire life, I had never been out in the ocean like this (5km off shore) with waves rolling and a blue abyss beneath us. It was terrifying, but we survived unscathed so it was amazing.

For me, the highlight was the sound of whales… you could hear them underwater. But the real treat was re-visiting our GoPro footage. The sound was so CLEAR! On top of this, I was lucky enough to get an extra special treat as I hoisted myself back up on the boat and was witness to a whale making its dive about a half a kilometre away, it’s fin curling up into the air and then sinking slowly into the blue. It was incredible to see that in person.

On the way back to shore, our instructor would tell us he was sure the whales we could hear while under water were likely only 70 – 100 ft away from our dive. Not sure what I would have done if a whale had casually entered our dive area. Seriously though… imagine yourself in this massive body of water, no land nearby, 10ft long sharks swimming below you, and BAM a 45 ft, 30,000 kg whale saunters over into view. I feel like I would be leaving some bodily fluids for the sharks below. I try not to think of it too much.

If your looking for exciting things to do on your next vacation, I would highly, highly recommend free diving with the sharks. Especially if you’re in Hawaii (Oahu), be sure to check out One Ocean Diving. Besides, we’ve heard that other companies offering caged shark diving tend to chum up the water in order to excite the sharks and create a better experience for their patrons. Personally, I hate the idea of baiting other animals for the enjoyment of humans. I really appreciated the natural experience we were provided, swimming freely with these harmless creatures.

Looking back, I honestly can’t say enough wonderful things about this experience. I find myself thinking about it often even as more time passes, hence the inspiration for The Apex.

Be sure to lather on the sunscreen. Being out in the open ocean leaves you vulnerable not just to the inhabitants below, but the crazy sun above.

Finally, bring a Go-Pro or some other water-resistant camera. We invested in the camera mainly to capture the dive, however we took it everywhere with us and made a video of our trip that we look back on often with a lot of love.  Here’s some of the shark footage – be sure to turn up the sound to hear the nearby whale!

Check out more on One Ocean Diving here.

Check out my painting, The Apex, inspired by our dive, here.